In just a few weeks’ time something remarkable happens.  Her Majesty the Queen and HRH Prince Philip celebrate 70 years of marriage – their Platinum Wedding Anniversary 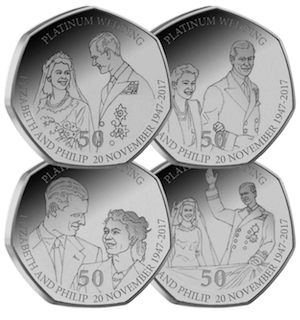 4 of the 8 Platinum Wedding 50p Coins

That’s because only around 30 couples in the whole of the UK ever reach that milestone each year.  Or to put it another way – the Queen and Prince Philip are literally one in a million.

Most importantly, these coins have been authorised by the Isle of Man Treasury, have full legal status AND a very limited number will enter circulation in the Isle of Man.

The 50p coin has rapidly become the UK’s most collectable coin spurred on by the release of the Olympic 50p coins and, more recently, the incredible demand for the UK’s Beatrix Potter coins.

And that’s why these issues are so important.

British Isles 50p coins like this rarely turn up in your change in the UK, making them some of the most sought-after circulating coins around.

As the first major Royal wedding anniversary to feature on any British Isles standard specification 50p coins, this is a very significant moment.

A moment that’s made even more important due to the incredible milestone 70 years of marriage represents.

The first of the eight Platinum Wedding 50p coins can be yours for just £3.99.

How you can own the new coins…

On the 20th November, Her Majesty Queen Elizabeth II and HRH the Duke of Edinburgh will celebrate their Platinum Wedding Anniversary – that’s an incredible 70 years of marriage and a first in British royal history.

In honour of the occasion a new coin has been issued – featuring a specially commissioned one-year-only double portrait.

The coin has been officially approved by both Her Majesty the Queen and Prince Philip, and proudly displays their initials surrounded by a design inspired by the North Rose Window of Westminster Abbey – where their wedding took place in 1947.

But it is the new double portrait that will turn heads and have collectors rushing to secure theirs. Designed by renowned sculptor Luigi Badia, it features both The Queen and The Duke of Edinburgh and will only ever be seen on Platinum Wedding Anniversary Coins.

It’s not very often that one-year-only portraits are released, not to mention a double portrait. They really are only issued for the most important Royal anniversaries.

As you’ll appreciate, designing a new effigy is not a simple process, with an extremely rigorous approval procedure.

“I was extremely honored to be commissioned to sculpt a brand new portrait to celebrate Her Majesty The Queen’s and HRH The Duke of Edinburgh’s 70th wedding anniversary.  I was inspired to use a contemporary image of the royal couple to capture both their achievement of reaching such a milestone and to reflect on the long life they have shared together.”

The new coin is to be struck in a range of different specifications, from a face value version right up to a staggering 10oz platinum edition – which has already sold out.

And the other coins are likely to prove just as popular – with a highly collectable proof coin, a pure silver coin, and a 5oz gold coin amongst those available, there is something to suit everyone.

These coins really do make a fitting tribute to Her Majesty and Prince Philip’s 70 years of marriage, and the stunning double portrait marks them out as truly prestigious commemoratives to forever remember this once-in-a-lifetime celebration.

You can mark the occasion by adding the Platinum Wedding Anniversary Proof £5 Coin to your collection today. It’s limited to just 4,950 worldwide and a sell-out is expected, especially as it features the new one-year-only double portrait.

Google has the answer to everything.  Well actually not quite everything, it seems… 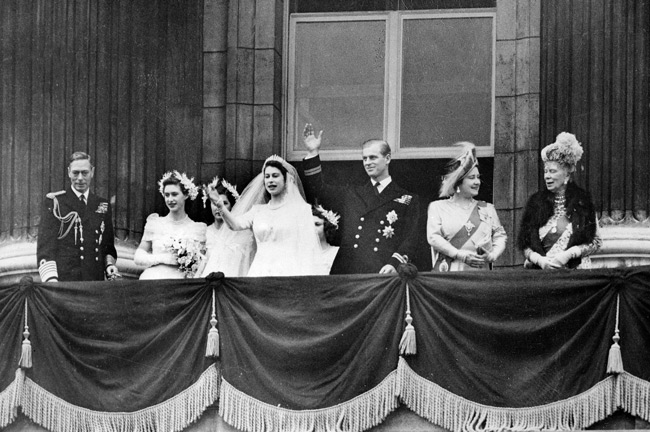 That’s because when I sat down to write this blog about the Queen and Prince Philip’s Platinum Wedding Anniversary in November this year, I thought it would be interesting to see how many couples actually celebrate 70 years of marriage.

The answer is Google doesn’t know.

And the more I dug around, the more I realised the reason why.  It’s incredibly rare.

So if Google can’t tell us, let’s see if we can come up with an answer.

Fundamental to the problem is that there is simply no central record of how long marriages last until one of the couple passes away.  But perhaps we can make some assumptions based on some of the statistics that the Office for National Statistics (ONS) do publish.

How likely are two people to both make it past their 90th Birthday?

In 1947 the median age for marriage was 23.7 for men and 20.5 for women[i], making Princess Elizabeth and Lieutenant Philip Mountbatten pretty typical of their generation, marrying aged 21 and 26.  It also means it’s fair to work on the basis that for nearly any couple celebrating their Platinum Wedding Anniversary, they are both going to be in their nineties.

So the chances for making it past the age of 90 in England and Wales is 0.8%[ii].  That means that the chances of two people BOTH making it is:

How many people were married in 1947?

Fortunately, it is much easier to uncover how many people married in 1947.  In fact 1947 is the very first year that the ONS not only holds data for the total number of marriages in England and Wales but also in which month they took place.[iii]

Certainly by choosing November, they were not following the trend.  In fact with fewer than 30,000 marriages that month, it was the third least popular month for weddings that year.

Overall, the young princess and her naval officer beau were one of 401,210 couples to tie the knot that year.  Statistics for Scotland and Northern Ireland appear more difficult to track down but it would be reasonable to extrapolate the numbers based on the overall UK population split, which suggests a figure for the whole of the UK.

But what about divorces?

Data is not easily available for 1947 but it can be found for English and Welsh marriages in 1950[iv].  According to the ONS, 8.6% of marriages at that time ended in divorce, so we should discount them out from our 466,000 UK marriages.

How many Platinum Wedding Anniversaries might we expect this year?

So we have now have two critical pieces of data.  The chances of two people making it past the age of 90 – the realistic milestone age to celebrate a Platinum Wedding Anniversary – and the number of marriages in 1947 that did not end in divorce.

Based on that we can multiply the two numbers together to give us a pretty reasonable estimate of the number of couples who will celebrate 70 years of marriage this year.

So, although there are no official statistics to back it up, it seems likely that only around 30 couples will join the Queen and Prince Philip in celebrating their Platinum Wedding Anniversary this year.  Or to put it another way – just 60 people in the UK will mark 70 years of marriage in 2017 – that’s 1 in a million.

That’s why for me, forget the Jubilees; forget the birthdays.  For the Queen and Prince Philip their Platinum Wedding Anniversary is the pinnacle of their long list of incredible milestones.  And we, the British people, must join them in marking this historic moment.