100 years ago this year, at 11 o’clock on 11th of November, the guns of war finally fell silent. The First World War was over.

While many fathers, sons, uncles and brothers came home, millions lay where they fell, on the Battlefields of Europe. Those who were lucky enough to be identified were placed in makeshift graves, often only identified by a rifle placed in the earth with his steel helmet placed on top as a final memorial.

To commemorate the Armistice Centenary, The Royal Canadian Mint have issued a remarkable new coin that honours each and every fallen soldier.

Struck in the shape of a WWI Brodie Helmet, it is more deeply curved surface than any other concave or convex-shaped coin I’ve seen before. The design is so unique in fact, that the Mint have kept the minting technique a closely guarded secret. 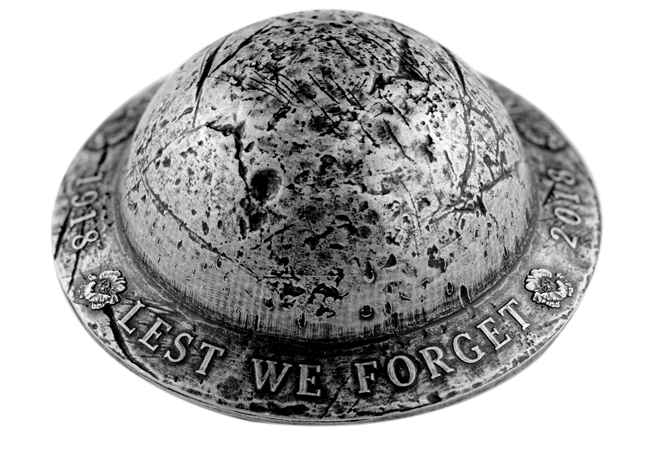 Although the original helmet would have been cast from Steel, this coin has been struck in the very finest .9999 or “four nines” silver, this is the purest grade of silver available. The Royal Canadian Mint is one of the very few Mints in the world with enough minting expertise able to strike coins with this incredible high relief finish. It’s an exceptional feat of craftsmanship.

What’s more the attention to detail is outstanding, each coin has been given a final antique finish and there are even engraved cracks and markings which complete the helmet’s battle-worn appearance. A reminder of the hardships endured by those who fought.

The amount of 2018 Silver ‘Helmet-Shaped’ coins available is very low. A worldwide edition limit of just 6,500 has been set by the Mint, but of course many of these won’t even make it out of Canada. Without any doubt, this has to be one of the most collectable issues ever struck.

The First World War will always be known as one of Man Kind’s darkest hours but poignant issues like this one allow us to remember those who have made the ultimate sacrifice.

We have just 500 WWI Lest We Forget Silver ‘Helmet-Shaped’ coins available for UK collectors, but to get one you’ll have to act quickly.