A brand new Remembrance Day Poppy Coin has just been released in support of the Royal British Legion.

Issued especially to commemorate Remembrance Day, the Official 2015 Poppy Coin is the latest commemorative to be struck in support of the Legion and features a distinctive new ‘wreath’ poppy design.

I spoke to the designer, Chris Lloyd, to find out his inspiration behind the new design…

“I was inspired by the poignant poppy wreaths that are laid on War memorials during remembrance services all over the country and the world.

“I was keen to form the wreath shape around the edge of the coin using intricately detailed engraved RBL poppies, with individual poppies picked out in the traditional red colour as worn by the public every November.

“I hope that this coin will serve as a timeless reminder of the sacrifices made in conflict both past and present.”

This exclusive new design is only to be found on the official range of coins issued in support of The Royal British Legion. The nuanced, textured piece of numismatic art is truly as unique as it is beautiful.

The only text on the reverse of the coin – ‘Lest we forget’ – taken from Laurence Binyon’s For the Fallen – serves as a starkly poignant reminder of the sacrifice made by so many.

A Range of Coins Available – Each with a Donation

The limited edition coins are available to own in a range of different metals to suit all collections. From a Proof condition £5 coin right up to an impressive 22 Carat Gold edition – there is even a generous 5oz Silver version, truly a sight to behold.

To further support the work of the Royal British Legion, The Westminster Collection have organised for a donation from the sale of each coin to go directly to the charity, helping them to continue to provide financial, social and emotional support to all who have served and are currently serving in the British Armed Forces and their families. 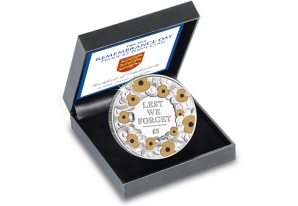 You can add the 2015 Remembrance Day £5 Proof Coin to your collection today – click here for details.

A donation from the sale of each coin will go directly to The Royal British Legion. 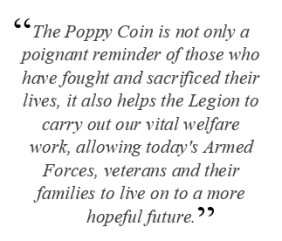 Charles Byrne, Director of Fundraising at The Royal British Legion

As the distributor of the annual Poppy Coin we are proud to continue supporting The Royal British Legion each year.

The coins, which have often included colour or gold-plated elements, are some of the most innovative pieces struck for collectors over the last 6 years.

Yet owning a Poppy Coin means much more than simply collecting the latest interesting or historic commemorative coin.

Each coin owned by you has resulted in a donation to the work of The Royal British Legion providing financial, social and emotional support to all who have served and are currently serving in the British Armed Forces and their families.

Louise Ajdukiewicz, Head of Corporate Partnerships at The Royal British Legion, says “These funds make a real difference to the charity and help us to continue our vital services supporting the whole Armed Forces community.”

Discover more about how the donations from the Poppy Coin helps The Royal British Legion support the Armed Services community.

But does owning a Poppy Coin provide an alternative to wearing a Poppy or donating directly to The Royal British Legion?  Of course not.

I’ll be making my annual donation to The Royal British Legion and wearing my Poppy with pride this year.  But I have also bought a silver Poppy Coin for each of my children in the knowledge that they will have a valuable reminder of the sacrifices of the First World War. 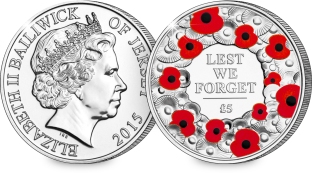 New Poppy coins are made available during the Remembrance period from October each year and this year’s design will be a ‘numismatic ‘first’. The 2015 coin features a poppy wreath encircling the famous quote, ‘Lest we forget’ – the first time that a wreath design has been used on a poppy coin.

Click here to secure your coin for just £5 (postfree) – with a donation going directly to the Legion’s work.

Some examples of how The Royal British Legion supports the Armed Services community:

Care Homes – The Legion has six care homes to provide short and long term care for serving and ex-Service people and their dependants. Situated around the country, they offer a wide range of services including four with specialist dementia care. Care home communities include men and women of varied ages and abilities, and because these homes are exclusive to ex-Service people and their dependants, there is a unique camaraderie.

Break Centres – they offer much-needed breaks to ex-Service and serving personnel and their families, who may be recovering from an illness, bereavement or other life-affecting event. The Legion have four Break Centres located in prime locations around the country.

Handy Van Service – they provide essential and critical support to ex-service people who are unable to carry out household repairs or small jobs, helping them to remain independent in their own homes. The team of trusted handy people are also fully trained caseworkers enabling them to look out for other issues and people at risk in order to flag to the wider welfare team.

Civvy Street – This service provides a range of information and advice on resettlement, learning and work. Civvy Street is designed to assist in-Service families, armed forces leavers and the veterans’ community adjust to civilian life and kick-start a new career. 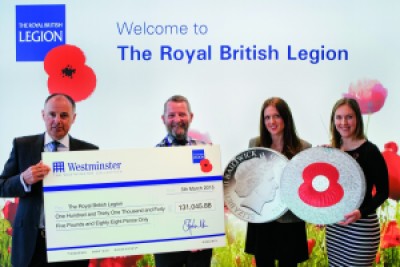 The ‘100 Poppies’ Coin, launched by The Westminster Collection in partnership with The Royal British Legion last October has now raised over £131,000.

Since 2008, The Westminster Collection, has created a unique commemorative poppy-themed coin each year to honour those who have sacrificed their lives in the Armed Forces. However sales of the 2014 centenary edition coin have seen the biggest donation to date, ensuring that the memories of the fallen live on – as well as the care and support offered by The Royal British Legion.

The full amount was presented to The Royal British Legion by The Westminster Collection’s Chairman, Stephen Allen, on Tuesday 14th April at a special event held at The Legion’s pop-in centre in Southampton. The money raised will help The Legion provide financial, social and emotional support to all who have served and are currently serving in the British Armed Forces and their families.

Stephen said, “though we have been working in partnership with The Royal British Legion since 2004, the Poppy Coin came about in 2008 as a way to commemorate the 90th anniversary of the end of the First World War. 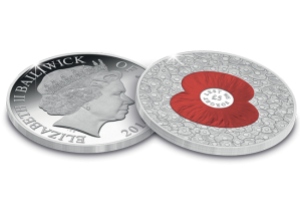 “We are delighted that the partnership has continued to grow, and our special Poppy Coins each year are a way of giving back to a charity that has done so much for both the Service community and the national spirit of Remembrance over the past 94 years.”

Charles Byrne, Director of Fundraising at The Royal British Legion, said the coin acts as “poignant reminder” of those who paid the ultimate sacrifice.

“We are so proud of our long-term partnership with The Westminster Collection, a family business which shares our commitment to supporting the entire Service community; whether it’s helping veterans to remain independent in their homes, supporting bereaved families, ensuring people have access to the benefits they deserve or offering employment advice.

“The Poppy Coin is not only a poignant reminder of those who have fought and sacrificed their lives, it also helps the Legion to carry out our vital welfare work, allowing today’s Armed Forces, veterans and their families to live on to a more hopeful future.”

Following the success of last year’s coin, The Royal British Legion have teamed up once again with The Westminster Collection to issue an official VE Day silver medal to mark the 70th anniversary of the end of the Second World War.