In 1971 the UK switched to a decimal currency, leaving the old £sd (pounds, shillings and pence) behind and introducing the decimalised coins we know today. You might even remember decimal day yourself, or using conversion charts and rhymes to learn the new currency. And if you’re like me, then you’ll probably remember the excitement of seeing the new coins in your change.

But decimalisation actually started under Queen Victoria, when two new decimal denominations were introduced. These were coins that were blamed for sickness, famine, and the unemployment of barmaids. In fact, they were so controversial that decimalisation had to be delayed for over a century!

The florin first appeared in 1849 with a value of 1/10th of a pound, or 24 pence. It was rumoured to have borrowed its name from a similar shaped coin from the Netherlands and was issued as a test to help the public warm to decimalised currency. However, its introduction didn’t go as well as hoped.

The Gothic Head portrait of Victoria was used on the first florins that were issued, and it featured the monarch wearing a crown for the first time in over 200 years. Another unusual design change was the exclusion of the abbreviation “D.G”, meaning “by the grace of God”. In a society where religion was important, the coin was thought to have angered God, so it became known as the ‘Godless Florin’ and was reportedly blamed for Cholera outbreaks and famine at the time.

The Godless Florin was quickly withdrawn from circulation in 1851 and was replaced by a Gothic florin, which had the same design, but included the “D.G” inscription in an attempt to appease the public.

Attempt number two at decimalisation came in the form of a double florin, equivalent to 1/5th of a pound. It was introduced in 1887 and featured the new Jubilee Head portrait of Queen Victoria, but it was withdrawn by the end of 1890 making it one of the shortest circulating denominations in British history.

One of the features that makes the double florin stand out in history is that it was almost indistinguishable from the crown coin. Neither carried the denomination and the only difference between the two, apart from the value, was that the double florin was 2mm smaller – not something that was easy to spot by eye.

This meant that the coins were easily confused, and the story goes that crafty patrons would trick barmaids into accepting the double florin as a crown. The double florin then became known as the ‘barmaid’s ruin’, because this act resulted in barmaids losing their jobs.

The first attempts at decimalisation happened over 170 years ago, and although the double florin was withdrawn from circulation after just four mint years , the florin was much more successful, surviving until 1993 before it was demonetised. It circulated alongside the 10p coin, which was introduced in 1968 to try and help the public warm to decimalisation – this time it was finally successful!

The Victorians experienced monumental changes in culture, industry, technology, and empire in their time, but it seems they just weren’t ready for the change of their currency.

Own a piece of history with the ‘Barmaid’s ruin’, the coin that caused barmaid’s to lose their jobs. Click here to order it today>>> 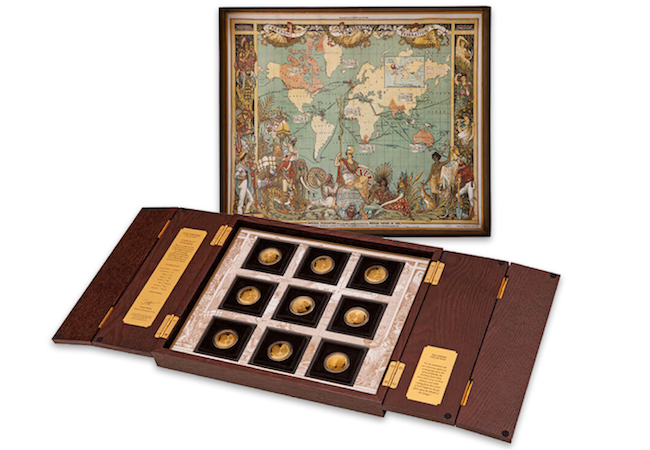 This year, a unique set of nine pure gold coins has been released to mark the prestigious heritage of the East India Company, still trading after 417 years.

At its peak the British company single-handedly accounted for half the world’s trade. They minted their own currency, started the mass production of tea for export in India and transformed dining tables in the West forever by introducing new exotic ingredients and flavours.

But despite the Company ceasing operations in 1874, it had changed the way the world traded. The Times commented ‘It accomplished a work such as in the whole history of the human race no other trading Company ever attempted, and such as none, surely, is likely to attempt in the years to come.’

Now The East India Company has issued The Empire Collection, a brand new, limited edition set of nine 24-carat gold coins which tell the story of the company from its foundation in 1600.

Each coin features a depiction of a British monarch who ruled during the Company’s first period of operations – from Queen Elizabeth I to Queen Victoria –alongside a key historic symbol.

Only 500 sets will ever be struck, making each of these coins immediately scarce in comparison to say, the Gold Sovereign, of which 10,500 will be issued this year.

Coins from left: Elizabeth I, James I and Charles II

The first three coins of the collection honour Elizabeth I, James I and Charles II. They feature symbols influenced by the Red Dragon (one of the East India Company’s ships), the rare Rose Ryal coins, and the charters granted by Charles II.

The next three coins mark the reigns of William III, Queen Anne and George II and make symbolic reference to Fort William, the main garrison for the British in Calcutta, the Company ‘balemark’ (the heart shape used as a trademark for all Company goods) and the design of the 1758 shilling.

The final three coins pay tribute to George III, William IV and Queen Victoria. The George III coins pictures the famous ‘Spade Guinea’, whilst the William IV coin depicts the beading and lettering used on the Mohur – the Company’s own currency. Queen Victoria’s coin is graced by a Crown containing a precious jewel set by the East India Company, marking when Victoria became Empress of India.

Finished to an exceptionally high standard in a numbered luxury Presentation Case decorated with brass highlights, the collection truly represents the global resonance of The East India Company. With just 500 available The Empire Collection is one of the most impressive gold coin sets you are likely to see, and it is bound to become a future collector priority.

You can now own the Empire Collection, but with such a tiny edition limit, it won’t be available for long. Sign up below if you’d like to be contacted about owning this impressive gold coin set: