On 13 September, the Bank of England will issue a new £5.  It will be the first-ever polymer (or “plastic”) banknote that they have issued.

But is it the UK’s first?

Well it is certainly not the first polymer banknote issued in the UK.

But it was Northern Ireland that beat everyone else to it with a commemorative polymer banknote in 1999 issued to mark the millennium.

The murky question of legal tender

So this might surprise you.  No Scottish or Northern Irish banknotes are legal tender.

Bank of England banknotes are – but only in England and Wales.

But don’t panic – if you live in Scotland or Northern Ireland – your money’s not worthless!  Legal tender does not mean quite what you think.  It has a very narrow technical definition which relates to your ability to pay a debt into a court.

In fact all Scottish and Northern Irish notes are considered “legal currency” across the whole of the UK.  But that does not mean that they have to be accepted and it’s not unusual for English or Welsh shop owners to be reluctant to accept non-Bank of England notes.

So where does this all leave us?

The Northern Irish and Scottish polymer banknotes clearly beat the new fiver.  But they were special commemorative issues with limited circulation and little recognition outside of their issuing nation.

The new polymer £5 note is certainly the first “legal tender” note issued in the UK but that’s not as important as it first seems.

It is, however, the first polymer banknote issued for ongoing circulation (rather than as a commemorative issue) which is generally accepted across the whole of the United Kingdom.

This is the VERY FIRST time that a DateStamp™ banknote has been released.

It wasn’t until 1793 that the first five pound note came into existence. The £5 denomination, known as the ‘white fiver’ lasted with relatively few changes until 1956 when it was last issued and replaced a year later with a new blue five pound note.

Of course, there have been numerous changes to the £5 banknote since then, from different designs, sizes, colourings and security features.

In 1970 a new series of notes were designed, each featuring an historical figure on the back. Portraits and highly detailed machine engraving blended into historical scenes making the new notes more difficult to copy.

But perhaps the biggest change of all is yet to come…

On 13th September 2016 a brand new banknote will enter circulation featuring the portrait of much-loved Prime Minster, Sir Winston Churchill . However, this new fiver is unlike any we have ever seen before – it’s printed on polymer.

Polymer notes are made from a flexible plastic, which is resistant to dirt and moisture, which means they will last longer and are better for the environment.

The new note has a number of security features including a see-through window and foil Elizabeth Tower – which is gold on the front and silver on the back.  It also features multiple holograms and micro-lettering under the Queen’s portrait – which can only be viewed under a microscope.

You have until May 2017 to spend your current £5 notes, after that they will cease to be legal tender – but will still be exchangeable at the Bank of England.

What do you think about the new era of plastic banknotes? Let us know in the comments below.

You can own Britain’s most famous banknote… in silver!

In a remarkable feat of craftmanship the White Fiver banknote has been re-isued in fine silver – and you can add one to your collection today.

I guess for any coin collector – certainly metal detectorists, the excitement of uncovering hidden treasures are what dreams are made of.

That was certainly the case for these five discoveries – from losing a hammer and finding a hoard of Roman coins, to uncovering sunken treasure in Israel. Each of these findings are incredible…

Hoxne Hoard: Display case at the British Museum showing a reconstruction of the arrangement of the hoard treasure when excavated in 1992.
Photograph by Mike Peel (www.mikepeel.net).

The Hoxne Hoard is the largest hoard of late 4th century Roman silver and gold ever discovered in the United Kingdom.

The hoard of treasure was discovered on November 16th, 1992. Farmer Peter Whatling, from the village of Horne in Suffolk, had lost his hammer in his field and had asked his friend, a retired gardener and amateur metal detectorist to help him look for it. While searching the field Lawes discovered silver spoons, gold jewellery and numerous gold and silver coins.

Upon alerting landowners and the local police, a team of archaeologists from the Suffolk Archaeological Unit carried out an emergency excavation of the site and discovered 14,865 Roman gold, silver and bronze coins from the late fourth and early fifth centuries along with approximately 200 items of silver tableware and gold jewellery.

A selection of highlight pieces from the Staffordshire Hoard

In July, 2009, Terry Herbert was using his metal detector on a recently ploughed field in Staffordshire when he discovered the largest trove of Anglo-Saxon treasure ever found.

Over 3,500 military items were discovered including weaponry items as well as several religious artifacts and decorative items. It is said that the hoard dates back to the 8th century and has influenced the way historians think about that period in English history.

In 2015 a group of Scuba divers were exploring the sea bed near the harbour of Caesarea National Park, Israel. They thought they had stumbled across a child’s toy when they found the first gold coin, but when they saw how many more there were and looked more closely at the engravings on them, they realised they had in fact discovered something a lot more significant.

Almost 2,000 coins were recovered, all of several different denominations and had been minted at different times. The earliest coin found in the treasure was a quarter dinar minted in Palermo, Sicily in the second half of the ninth century CE. Most of the coins though belong to the Fatimid caliphs Al-Ḥākim (996–1021 CE) and his son Al-Ẓāhir (1021–1036), and were minted in Egypt and North Africa.

The exact value of the coins today is still unknown.

Coins and bullion from the Harrogate hoard. Discovered January 2007.

In January 2007, semi-retired businessman David Whelan and his son Andrew discovered the Harrogate hoard using metal detectors near the town of Harrogate in North Yorkshire.

It was the largest Viking hoard discovered in Britain since 1840 and consists of 617 silver coins and 65 other items, including ornaments, ingots and precious metal – all of which was hidden in a gilt silver vessel lined with gold which was made in France or Germany around 900.

The coins date from the 10th Century and come from all over Anglo-Saxon England, as well as parts of Asia. Reports indicate that the coins bear Islamic, Christian, and pre-Christian Norse pagan symbols.

The independent Treasure Valuation Committee valued the hoard at £1,082,000. The hoard was purchased jointly by the York Museums Trust and the British Museum. 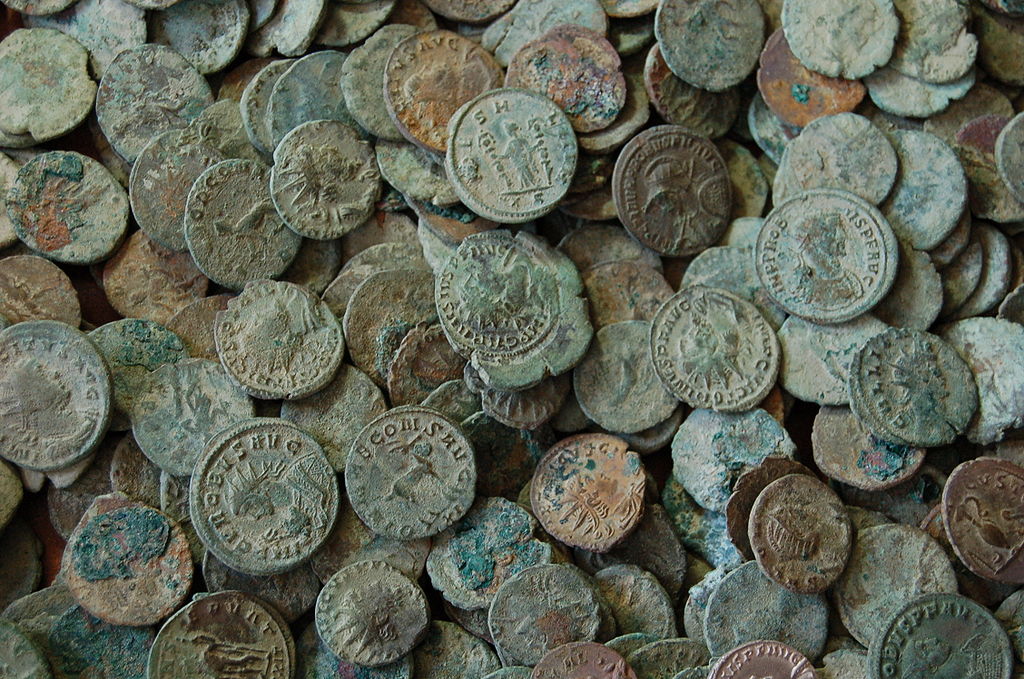 The coins were contained within a ceramic pot and date from AD 253 to 305. Most of the coins are made from debased silver of bronze and was the equivalent of four years of pay for a Roman legionary.

Weighing 350 pounds, the coins may have been buried as an offering for a good harvest or auspicious weather.

The hoard is one of the largest ever found in Britain, and is also important as it contains the largest group ever found of coins issued during the reign of Carausius, who ruled Britain independently from 286 to 293 and was the first Roman emperor to strike coins in Britain.

Have you ever discovered any hidden treasures? Let us know in the comments below…

You can now own your own treasure chest containing 1kg of mixed coins, medals and tokens from all around the world.